Note: These specifications are meant only as a guide; they should not be construed as hard and fast rules, as we realise that every player's subjective requirements often differ. 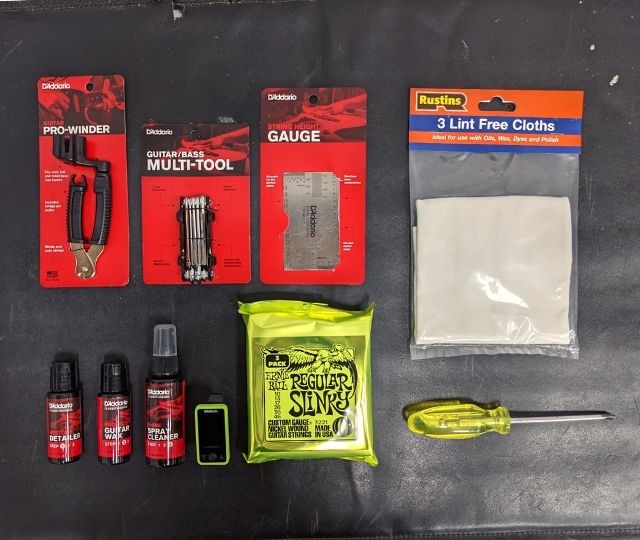 For strings to stay in tune, they should be changed regularly. Strings that have lost their integrity (worn where pressed against the fret) or have become oxidized, rusty and dirty will not return to pitch properly. To check if your strings need changing, run a finger underneath the string and feel for dirt, rust or flat spots. If you find any of these, you should change your strings.

How you wind the strings onto the pegs is very important, whether you're using locking, standard or vintage tuning keys. Start by loading all the strings through the bridge and then loading them onto the keys as follows:

Picture the headcap of the neck as the face of a clock, with the top being 12:00 and the nut being 6:00. Line the six tuning machines so that the first string keyhole is set at 1:00, the second at 2:00, the third and fourth at 3:00, the fifth at 4:00, and the sixth at 5:00. Pull the strings through tautly and tighten the thumb wheel, locking the string in. Now tune to pitch.

To reduce string slippage at the tuning key, we recommend using a tie technique. This is done by pulling the string through the keyhole and then pulling it clockwise underneath and back over itself; creating a knot. You'll need to leave a bit of slack for the first string so you have at least two or three winds around the post. As you progress to the sixth string, you'll reduce the amount of slack and the number of winds around the keys. 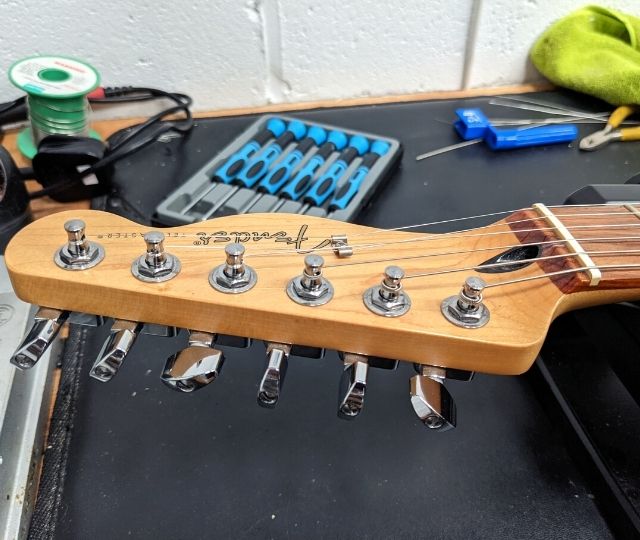 If your tuning keys have a screw on the end of the button, check the tightness of the screw. This controls the tension of the gears inside the tuning keys. Do not over-tighten these screws. They should be "finger-tight." This is very important, especially on locking tuners.

Telecasters can have two distinctive types of bridges. The most well-known type is the vintage-style three-section bridge. The other is the modern-day six-section bridge, such as the American Standard Telecaster bridge. Check your tuning before proceeding with intonation.

You can preset the basic intonation of your guitar by taking a tape measure and measuring from the inside of the nut to the center of the 12th fret (the fret wire itself; not the fingerboard). Double that measurement to find the scale length of your guitar.

For a vintage three-section bridge, a series of adjustments must be made to compensate for the lack of individual string intonation. Adjust the first bridge saddle to the scale length, measuring from the inside of the nut to the center of the bridge saddle. 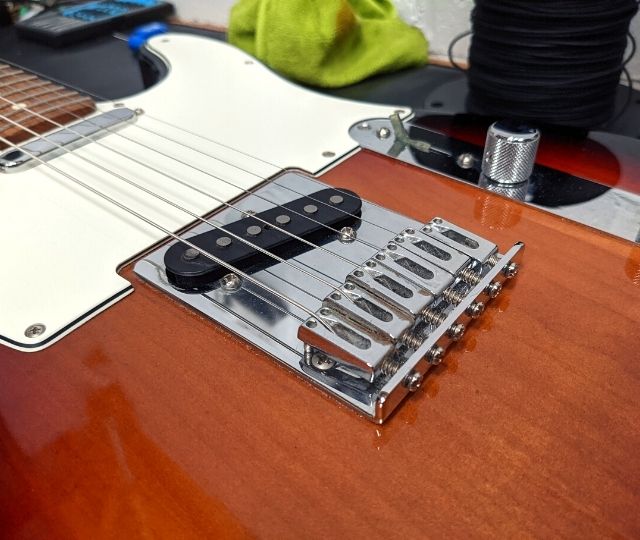 One of the best ways to reduce string breakage is to lubricate the string/saddle contact point with a light machine oil (we prefer 3-in-1 oil because it contains anti-rust and anti-corrosive properties) every time you change strings. The oil insulates against moisture and reduces friction and metal fatigue. String trees are another point of contact and should also be lubricated; a small amount of lip balm applied with a toothpick works well.

First, check your tuning. Affix a capo at the first fret and depress the sixth string at the last fret. With a feeler gauge, check the gap between the bottom of the string and the top of the 8th fret—see the spec chart below for the proper gap. 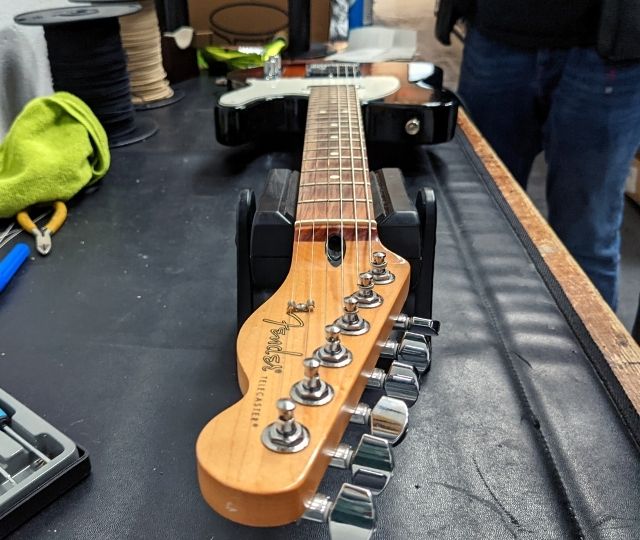 Adjustment at headstock (allen wrench): Sight down the edge of the fingerboard from behind the headstock, looking toward the body of the instrument. If the neck is too concave (action too high), turn the truss rod nut clockwise to remove excess relief. If the neck is too convex (strings too close to the fingerboard), turn the truss rod nut counter-clockwise to allow the string tension to pull more relief into the neck. Check your tuning, then re-check the gap with the feeler gauge and re-adjust as needed.

Adjustment at neck joint (phillips screwdriver): Sight down the edge of the fingerboard from behind the body, looking up toward the headstock of the instrument. If the neck is too concave (action too high), turn the truss rod nut clockwise to remove excess relief. If the neck is too convex (strings too close to the fingerboard), turn the truss rod nut counter-clockwise to allow the string tension to pull more relief into the neck. Check your tuning, then re-check the gap with the feeler gauge and re-adjust as needed.

Note: In either case, if you meet excessive resistance when adjusting the truss rod, if your instrument needs constant adjustment, or if you're simply not comfortable making this type of adjustment yourself, bring your instrument to Northwest Guitars or your local guitar tech.

Players with a light touch can get away with lower action; others need higher action to avoid rattles. First, check tuning. Using a 6" (150 mm) ruler, measure the distance between bottom of strings and top of the 17th fret. Adjust bridge saddles to the height according to the chart, then re-tune. Experiment with the height until the desired sound and feel is achieved.

Set too high, pickups can cause myriad inexplicable phenomena. Depress all the strings at the last fret. Using a 6" (150 mm) ruler, measure the distance from the bottom of the first and sixth strings to the top of the pole piece. A good rule of thumb is that the distance should be greatest at the sixth-string neck pickup position, and closest at the first-string bridge pickup position. Follow the measurement guidelines in the chart below as starting points. The distance will vary according to the amount of magnetic pull from the pickup. 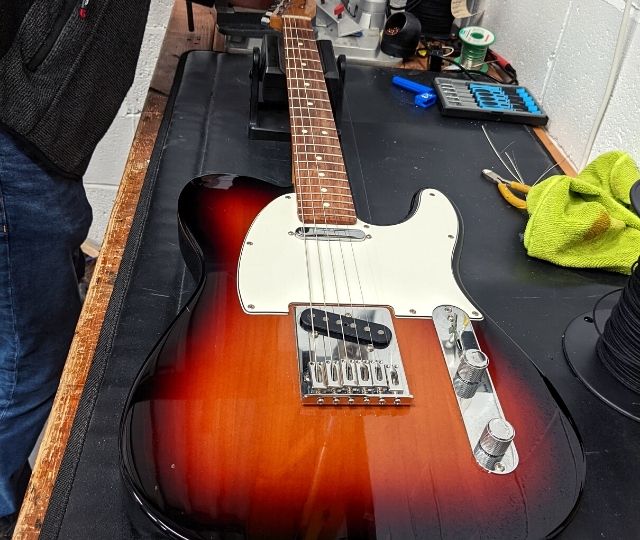 Adjustments should be made after all of the above have been accomplished. Set the pickup selector switch in the middle position, and turn the volume and tone controls to their maximum settings. Check tuning. Check each string at the 12th fret, harmonic to fretted note (make sure you are depressing the string evenly to the fret, not the fingerboard). If sharp, lengthen the string by adjusting the saddle back. If flat, shorten the string by moving the saddle forward. Remember, guitars are tempered instruments! Re-tune, play and make further adjustments as needed.

There are a few other things that you can do to optimize your tuning stability that have more to do with playing and tuning habits.

Each time you play your guitar, before you do your final tuning, play for a few minutes to allow the strings to warm up. Metal expands when warm and contracts when cool. After you've played a few riffs and done a few dive-bombs, you can then do your final tuning. Remember—with most tuning keys, it's preferable to tune up to pitch. However, with locking tuners, go past the note and tune down to pitch. Finally, wipe the strings, neck and bridge with a lint-free cloth after playing. When transporting or storing your guitar, even for short periods, avoid leaving it anyplace you wouldn't feel comfortable yourself.